This is a simple kickstarter project for Godot projects. It comes with some standard features and little helpers as well as some stuff, no one has time for in a game jam.

The scripts are arranged in the include sequence order.

In debugging mode while running the game you have the following hotkeys:

The boilerplates entry point is the GameManager scene. The game manager consists of two independet viewports one for the game and one for the menu. From here you can access the menu. Levels will be stored in the Global.gd 'levels' constant. A level will then be added as a child to the LevelHolder node within the gameViewport.

In previous version of this boilerplate the GameManager was the central gateway for communication with nodes. For obvious reasons it was replaced with 'Signal Driven Events' (Events.gd). Allowing to initiate and hook events from all nodes.

Before the 'Signal Driven Events' where included there was the idea of getting rid of get_parent() cascades. In a first approach we introduced the GameManager node which was linked in the Global.gd and therefore accessible from all nodes. As this became very intransparent, we've decided to utilize Godot Signals. To make them accessible globally, all (global) signals are defined in the Events.gd. Also providing a 'connect_signal' function to use it everywhere.

So why is it cool anyway?

Interacting with a node from multiple locations. So we all need an accoustic feedback for button clicks. If you have an ingame menu and also the main menu. You could put in both scenes an AudioStreamPlayer. But if you change something (pitch, volume, sound effect...) you will also have to adapt it in the other node or make a own scene for it. With Events.gd you can simply emit a signal to play the sound.

No get_parent() cascades. When the player needs to interact with the camera, e.g. scene transition, shake, .., you may have to find the camera first. E.g. get_parent().get_parent().get_node("Camera2D"). If you add another node inbetween you will also have to adapt the cascade. Or you can just simply emit a signal like:

Calling code in multiple nodes. Especially in mobile games you have a button to mute the sound or music. But you also can change it in the menu. To keep the indications (on/off) synced, the boilerplate utilizes signals.

Via the event hooking the emited signal is processed in multiple locations:

This template is optimized for pixel art games with predefined upscaling of 2 (window mode) or 3 (fullscreen mode). However you can change this code easily:

The default mode is windowed-mode. In the 'Global.gd' you will have to adapt the 'videoSetup()' call with your desired upscaler value. And also adapt the switchFullscreen() function.

Each menu screen is a Control node. In this boilerplate there are two screens included. Main screen and settings screen. When adding a new menu screen, make sure to add the case in the 'switchTo' function, add a line in 'hideAllMenuScenes' and extend the MenuState enum if needed. It is intended to only place menu related logic here. Turning sound/music on and off or switching to fullscreen will be handled elsewhere (GameManager).

There is a simple level loading mechanism included in this boilerplate. In the Global.gd a constant called 'levels' keeps an array of all the levels. A loaded level will be added as a child in the GameManagers node 'LevelHolder'. It will be unloaded if the player returns to the menu. This could be easily extended to load the next level as well, reload the current level or display a end game screen.

All audio files are managed in a single place: Src/AudioPlayer/AudioPlayer.tscn

While the project is running press F4 to open the console. You can add multiple categories with multiple options. This is useful for e.g. level change, respawn and set turn/life/ammo/stuff.

This is an example using the console on a player node:

addCategory adds a new category if not already exists. clearOptions removes relicts of old scenes which may have re-instanced. addOption takes the category handle, the displayed name of the option, a function reference and arguments.

Sometimes when you update the game, you will also have to store some more user configuration. As the user may have stored an older cfg file already, this file needs to be updated. Therefore the Global.gd file contains a constant CONFIG_VERSION. While loading the user config the version number will be checked. If there is a missmatch 'migrateConfig(..)' will be called.

In the migrateConfig function you can update for different scenarios. e.g. version 0 to 2, or 1 to 5. An update mechanism could be:

Note: Adding new userConfig members also requires changes in the loadConfig() function. This could be adapted if you know what you are doing :)

I just found this and was messing around with it today. I found that the debug console wasn't working when used with the example on the page. I get the error "Invalid call. Nonexistent function 'call_func' in base 'FuncRef'. Kinda weird, so I thought you might want to know.

Thank you, this is very helpful!

Hey, thanks for this its super cool! I don't think I'm going to use it because I like to make things by myself, but reading through the files gave me very good ideas! 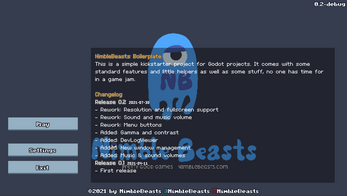 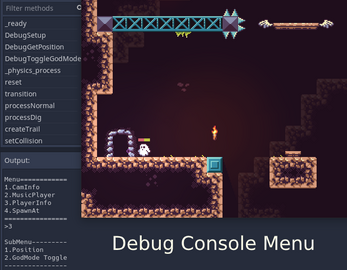