This game is under development! With great certainty this game contains bugs. If you find one, please report it. We want to constantly update and upgrade the game.
Thank you and enjoy our little game.

Bounce Restart is a tiny physics-based "puzzle" platformer which is heavily inspired by Clementines' Bit's Adventure Through Spike Hell.

This game is beta version and comes with 20 levels.

Music by RoccoW. Fonts by Jotson and, of course, our own free fonts.

Throwing the ball around and getting a quick win is very satisfying!

Cool game.  It was fun to play and the mechanics in it along with the pixel art style and music fitted really well with each other. Good job.

This is just a repeat.

I will give out 3 Ideas for this game. 1 power ups, some of the power ups that would or would not fit the game is a bouncy ball which is fast but is super bouncey, the next one is a spike slash heavy ball wich can go through brick walls and take two hits from spikes and bullets and its weakness is that it is slow and heavy, the next one is the balloon which can float its weakness is that it is super slow but when hit by a spike it starts to fly super fast and but for a limited time and the way to control it is to click whre you want to go like the game's controls,the final power up is the slime ball the special thing about this power up it sticks to walls and is invincible to spikes meaning it can go though spikes but it's weakness is it so slow and you cannot bounce. 2 create a level. I would be like happy wheels create a level.The final idea I have is racing meaning a 2v2 or 4v4 game and it can be run by servers like a list of severs and also a code to join a server with your friend.

I am going to say hi every day.

I am just asking how many levels are you planning to have on this game?

Thank you for your feedback! We will discuss your ideas internally. (We may also provide a map editor.)

Bullets that are exploding are still able to kill you, I think. That feels unfair.

Thank you for your feedback! We have fixed this issue with 0.6.

This is a very good game, I'm a big fan of this kind of retro graphics.
It seems to be reminescent of cga.

Wait what?! This is incredible 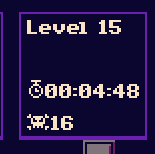 damn trying to get to 3 second is hard

that was same for m

We will have a look at it. Also we are working on more levels :P

Challenging! Started playing and could not stop until I finished it all. Levels 10 and 15 were specially hard (144 deaths before I passed L15 :b)

It took me 239 attempts for the final level

Really great puzzle game! It is in my Top 5 for this week!

overall its okay, could better. The last level is way too hard

What would make it a better game?

If you click fast enough, the ball pretty much just follows your pointer and you can play it like a maze game. Pretty sure I wouldn't have finished the last few levels any other way...

Such a fun game! Really liked the gameplay mechanic and the sound, especially.

Amazing game dev :D i hope you enjoy my gameplay

Thank you! Very much!

Fun and addicting. The controls felt pretty smooth, the force and bounciness of the player character felt just right.
Also that last level was a pain to complete, in a good way.

Thank you for your feedback! We may expand the pain with some more levels soon :) 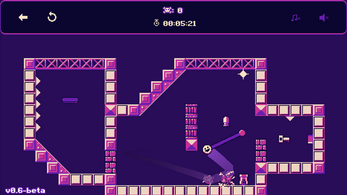 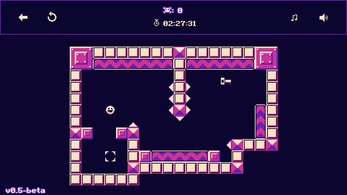